It’s been three weeks since Hyde, Jekyll, Me ended, a blissful three weeks where I didn’t have to watch or recap that abomination passing for a drama. Leading man Hyun Bin stepped out last week for a water filter promotional event where he was the brand endorser. I’m shocked we didn’t get to see Seo Jin drinking filtered water in every episode of Hyde, what with the drama shoving in so many PPL on top of not writing a coherent story.

Binnie looks fantabulous as usual, back to his typical hairstyle rather than the trifecta of Seo Jin, Robin, and Seo-bin hair he was alternating in the drama. He probably has as much chemistry with the water filter he’s showing off as he did with Han Ji Min in Hyde, ain’t nothing ever going to convince me those two had any chemistry with each other whatsoever. No one is teflon in the industry and this harsh Hyde failure is clearly going to taint a bit of the Binnie magic, which won’t matter if he’s focusing on his movie career in the long run. 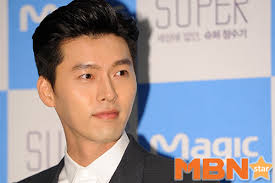