This isn’t my favorite pictorial from Lee Min Ho, continuing a trend of him being hit-or-miss for me lately. Lee Min Ho was in LA in early August to shoot a spread for Elle Korea that is best described as funky in the desert. It’s like a mish-mash of styles and outfits, none of which go really well with the dry countryside faux desolation backdrop. I’m sure the vaguely American Indian inspired print jacket he’s wearing in the cover photo is some ridiculously expensive fall 2015 couture piece but it’s still hideous. Even Lee Min Ho can’t pull it off. The picture where he’s wearing all black and has his leg up on the beat up car would work if he didn’t look vaguely uncomfortable in his crotch area, like he can’t wait to put his foot down. My favorite shot is the quiet one where he’s lounging with a piercing look his his eyes, but sadly the affection is negated by the stylist making him go shirtless in a blue suit topped with a green long cardigan. So much huh? all around. 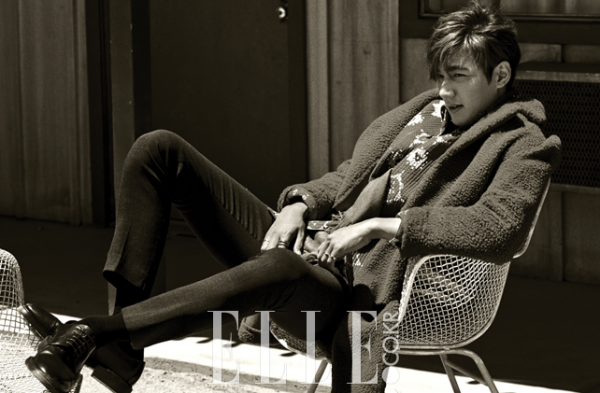