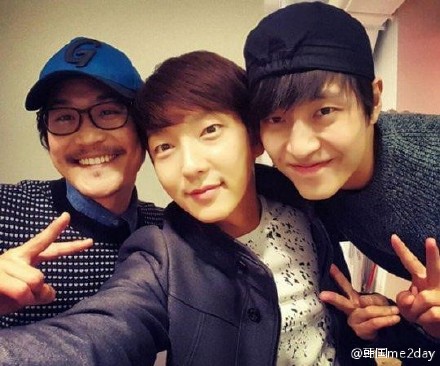 I’m always impressed at how hardworking and seemingly tireless some entertainers are. Case in point is Lee Jun Ki, other than his two year military service hiatus, he’s a nonstop star toggling both an acting and singing career, and doing so with an upbeat positive attitude. I feel like he just finished Scholar Who Walks the Night yet here he is in the first picture from the production of upcoming Korean Bu Bu Jing Xin, in a selfie with costars Kang Ha Neul and Kim Sung Kyun. He actually did another project between Scholar and K-BBJX, heading off to film a Resident Evil movie with Mila Jovovich.

Seeing Jun Ki and Kang Na Neul eases my mind a bit, the age difference isn’t as visually jarring as I initially worried. In the drama the two men play rival princes who are the closest in age and ability, while Kim Sung Kyun won’t be playing a prince and instead will be a court official. Speaking of hardworking, leading lady IU has been in the news in recent months for her singing career, and this week visited Taiwan for a fan meeting concert that was jam packed, an indicator of her popularity overseas in the Chinese speaking countries. That bodes well for her casting in the highly anticipated BBJX remake.