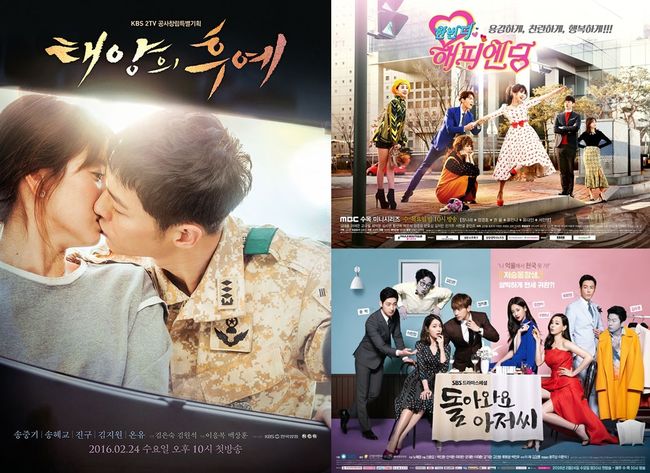 I don’t know if there ever really was an entire era of the star led K-drama wave, when viewers tuned in solely for the actor or actress alone. That clearly is not the case in recent years, with A-list stars fizzing out on television drama ratings and newbies garnering top shelf viewership on the strength of the drama story. My gut tells me it’s narrative driven these days, but it doesn’t mean the popularity of a star (or many stars together) won’t induce audiences to tune in initially for a drama. With that said, the K-media wondering who among the upcoming Wed-Thurs bloodbath will bring in the eyeballs has the first results in.

The two dramas premiering head-to-head are KBS drama Descendants of the Sun, with Korean golden son Song Joong Ki and Hallyu star Song Hye Kyo, against Please Come Back Ahjusshi on SBS starring singer-actor Rain with tons of name recognition along with current K-drama ratings queen Oh Yeon Seo with a side of Lee Min Jung. Ratings for Wednesday’s episode 1 garnered a promising 14.3% AGB/12.6% TNmS nationwide for DotS while Ahjusshi started off half that at 6.6% AGB/8.0% TNmS ratings. Already airing MBC drama One More Happy Ending had no movement with the arrival of these two new dramas, remaining static at 5% ratings.

First off, a big congrats to DotS and the Song-Song pairing, not to mention another notch in screenwriter Kim Eun Sook‘s belt. Coming shortly thereafter to join the fray in two weeks is Moon Chae Won with her golden record of ratings hits alongside Lee Jin Wook in Goodbye Mr. Black. Will you check out any of these dramas for one or both of the leads, or will the decision be based on the interest in the story being told?

I like that the three dramas are totally different in genre and narrative, sometimes K-dramas get into a trend and a slew of same topic dramas get the green light at once. Here the three are soooooo different it almost feels like viewers are getting the short shrift in having to choose among them. Looks like the big budget medical and disaster drama has the momentum out of the gate, only time and additional episodes will tell if DotS can maintain it.