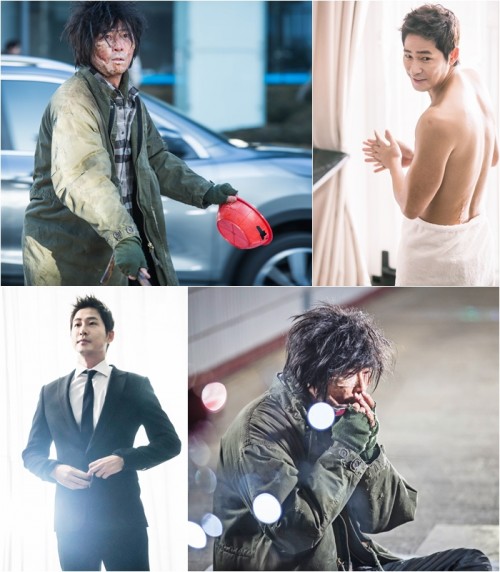 The titular Monster (Tyrant) of upcoming MBC Mon-Tues drama makes his grand and not so grand entrance in the first official stills of Kang Ji Hwan in character. The drama is an epic 50-episoder that chronicles the life of the leading man from the 1997 financial crisis through the present day. Think Giant with a slightly shorter time span. Not sure why Kang Ji Hwan looks like a diseased beggar in some stills and a dapper chaebol in another. I’m fairly the one with him topless with a bath towel can be any type of character in any context, lol.

I can’t wait to see him back on the small screen, and in a role that sounds meaty and sprawling enough to really let him showcase his broad range. He really is one of those K-actors who are believable in either extreme – down and out better or flying high rich guy. Lee Ki Kwang and Lee Yeol Eum play the younger versions of Kang Ji Hwan and leading lady Sung Yuri, and their stills have been released already but there is a new one below showing them getting up close and personal. Nice to see the girl make the move, too bad Lee Ki Kwang’s expression looks so uninterested.