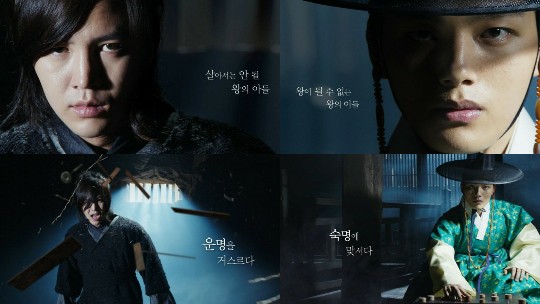 SBS pull back a bit of the curtain today to offer a glimpse at upcoming Mon-Tues sageuk drama Jackpot (Daebak), which signals that long running Six Flying Dragons is ending soon as well as the coming return of Jang Geun Seok in period costume. The latter is the most shallow of reasons to watch Jackpot but for me one of the driving reasons I’m so interested in this drama which is billed as the Joseon version of hit gambling revenge drama All In. I have such fond memories from Jang Geun Seok’s earlier drama roles in sageuks like Hong Gil Dong and Hwang Jin Yi, and in the years since he’s only done modern pieces which play up his flower boy charms but not his acting gravitas when doing more substantive roles in serious stories. The first teaser preview for Jackpot shows the dueling leading men in Jang Geun Seok and Yeo Jin Gu, one is the lower class gambler and the other an educated yangban, but both seem to have a raging temper the way they overturn tables. There’s plenty of intensity from both sides reaffirming that it will be a treat to see these two grown up/growing up child actors duking it out onscreen.