I’ve always preferred traditional wuxia dramas over the skewing younger fantasy wuxia with more special effects that come across like an RPG visual. It’s pretty telling that many of the recent years fantasy wuxia dramas have been adopted from popular role playing video games as both the games and such dramas remain quite popular in China. Not as common as the straight up fantasy dramas and one upcoming highly anticipated production continues to look like a visual feast.

Three Lives Three Worlds, Ten Miles Peach Blossoms is currently filming the drama (and movie, with a different cast) and the first set of character posters rocked my world. Female lead Yang Mi was the standout in how perfectly she exemplified the goddess type beauty, whereas male lead Mark Chao is styled all black and ominous in contrast. The production has now released the first set of drama stills with scenes from the story and every cast member continues to knock it out of the parks fantasy gods and goddess from ancient Chinese lore dealing with their very messy loves and losses. 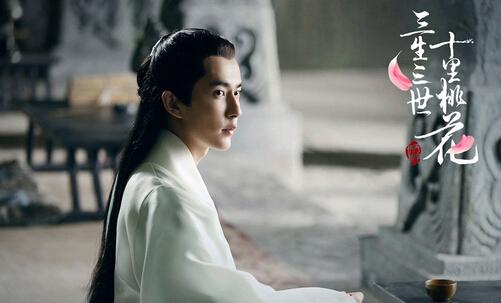