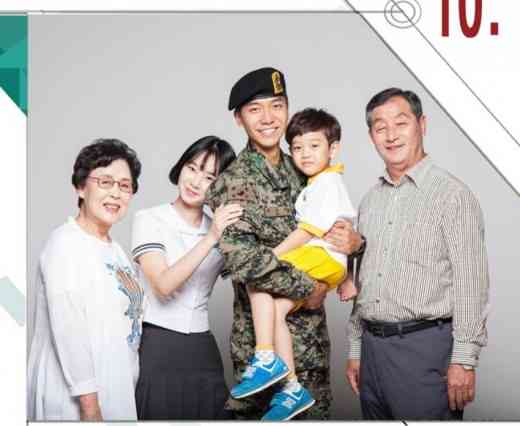 There’s some good news from the military enlisted singer-actor front after a week where K-ent was dominated by a genuine awful legal mess. Enlisted soldier Lee Seung Gi has finished his training and is now serving in the army, and with it comes the army using Lee Seung Gi for additional needs beyond his man power. Lee Seung Gi is featured on the marketing publicity poster for the National Armed Forces, a smart move that also capitalizes on the recent upswing in sentiment towards the Korean military thanks to hit drama Descendants of the Sun.

In that drama, Song Joong Ki’s male lead Captain Yoo Shi Jin is asked why he serves his country and his answer is to protect the elderly, kids, and woman, which makes this cover photo of soldier Lee Seung Gi surrounded by a woman, a kid, and the elderly all that more hilarious. And cute, very warm and fuzzy type of cute, exactly the image that Lee Seung Gi gives off anyways. Nice to see him representing and looking so upstanding in uniform. Captain Yoo Shi Jin would approve.