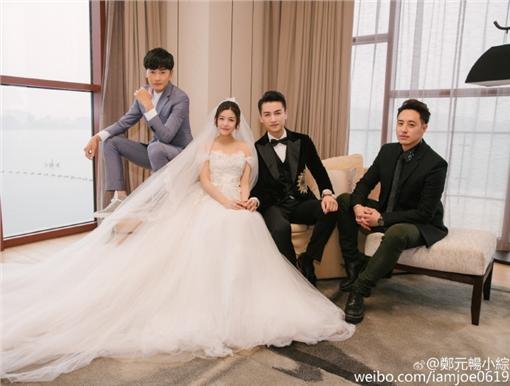 The Beijing wedding of C-actor Chen Xiao to TW-actress Michelle Chen was indeed as star-studded as fans expected considering how well liked and sociable the newlyweds are in the Chinese-speaking entertainment industry. Closest friends like Joe Cheng and Wilbur Pan got to take official pictures with the wedded couple, but most of the star sightings was at the banquet reception.

There were quite a few previous leads from the various Condor Heroes adaptations, so fitting for Michelle and Chen Xiao since they are known as the Return of the Condor Heroes couple now that they turned their fictional OTP into real life OTP. Both Legend of the Condor Heroes 2006 female leads Ariel Lin and Liu Shi Shi were in attendance, and hopefully they hung out and traded Hu Ge stories lol. Check out the reception pictures below as the wedding wrapped up with a flourish Tuesday night and by Wednesday morning the newlyweds were off to Taipei for their second reception there.