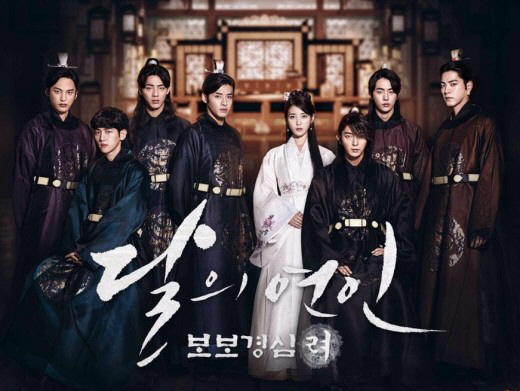 Countdown is less than a month from the premiere of the K-version of Bu Bu Jing Xin, with SBS airing Moon Lovers: Scarlet Heart: Ryeo (Bobogyungsim: Ryeo) on Monday August 29, 2016. To start off the drama week SBS has released the full cast official drama poster that is reminiscent of every single sageuk drama poster from here on back through drama production history, only different being the sheer number of gorgeous leading men smushed into one single picture.

Older more serious sageuks aged up the male leads, most everyone rocked mustaches either from the get go of a series or from midway onward, whereas K-BBJX is going for pretty over realistic even when you take into account the eye patch male lead Lee Jun Ki sports as 4th Prince in some scenes. It’s also funny that my eyes are drawn too all the dark robed male leads even when IU is supposed to stand out in white. The first Korean teaser takes all the action scenes from the press long preview last month but spliced together in a super exciting way. Love it!