Happy tidings and well wishes are pouring forth as Chinese entertainment was hit with the soft lob of a love rocket. C-actress Tang Yan and C-actor Luo Jin have confirmed long running suspicion/fanship dream of a romantic relationship, making it Tang Yan’s first confirmed boyfriend since her very messy and very public split with TW-actor Roy Qiu four years ago. The timing couldn’t be better for both stars as they are currently costaring as romantic leads in the airing period drama The Princess Weiyoung, which is a reunion after they did Agent X back in 2012. On December 6th Luo Jin posted a public weibo wishing his beloved a happy birthday alongside a photoshopped picture of the two as insanely adorable children together, too bad they didn’t actually know each other since childhood. Still super cuuuuute, I can’t even! Tang Yan answered back on weibo “So it was you” with a pun so the phrase also means “It was always destined to be you.” Grah, these two are giving me cavities of the good kind and I’m wishing them happiness and success together! 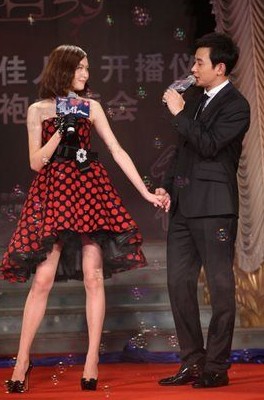