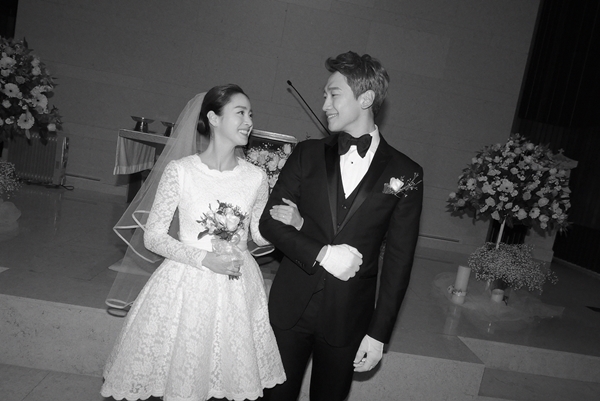 Talk about lightning speed, at least in terms of the news to happening gap. Dating turned engaged Korean top stars Rain and Kim Tae Hee are officially married! Yes, not two days after Rain wrote a heartfelt handwritten note to his fans that he was getting married to the love of his life, the couple have tied the knot in Seoul this Thursday January 19th. With no media fanfare whatsoever, the couple got married in a Catholic church in a closed ceremony with only family and close agency colleagues and friends in attendance. Another top Korean star Ahn Sung Ki reportedly blessed the couple, this after he was present as well last year for Rain’s baptism after he converted to Catholicism. The couple will not be going on an official honeymoon but who cares as they have a lifetime to enjoy life together. Congrats to Mr. and Mrs. Jung!

Since the couple will likely not release wedding pictures, this is about as close as it gets imagining them in their wedding attire. Gosh darn it they are going to make insanely beautiful babies. And in five to seven years Rain can do Superman Returns and show us his parenting skills, lol.

[Edit: they released some pictures, woohoo! Soooooo beautiful and happy together” *tears*]