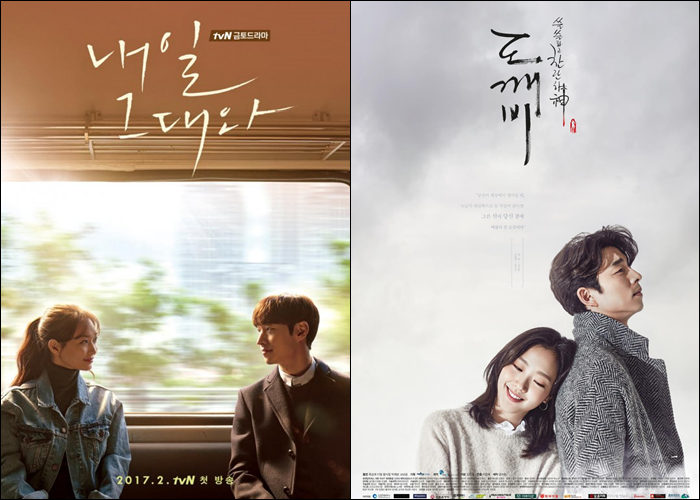 It was a night of nostalgia walk down Goblin lane for fans still missing the recently concluded hit drama on tvN as the network aired a special episode on Friday night that took in a solid cable network rating of 3.6% Not bad for a rerun episode of a drama that finished two weeks ago. After that was the premiere of the regularly scheduled new Fri-Sat drama Tomorrow With You, with Lee Je Hoon as the time-traveler trying to balance love with Shin Mina and knowing the exact moment he’s supposed to die. It’s both macabre and fascinating if done right. The first episode of Tomorrow brought in 3.18% ratings, also a good start though Goblin still managed to eke out a stronger showing on a repeat run. The network can count it a three-fer victory for this night as new reality show Newlywed Diary got 4.66% rating, with plenty of viewers turning in to watch the romance of recently married acting couple Gu Hye Sun and Ahn Jae Hyun.

I’m really excited to check out Tomorrow With You to see what the story has in store with the time-traveling husband and his pretty dimpled wife. If the drama is good the ratings will certainly keep going up but the huge vaulted rating leaps of Goblin will take quite a lot of juice to repeat. Nevertheless tvN ended 2016 on an high note and is continuing the same success into the start of 2017, at least on the Friday night time slot.