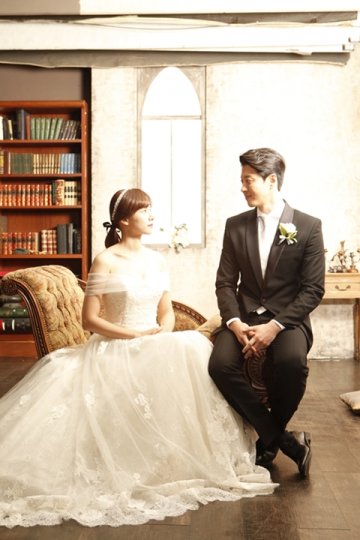 This wedding announcement takes the cake this year for greatest initial shock followed by a collective shoulder shrug. Former drama costars turned real life couple Lee Dong Gun and Jo Yoon Hee have announced that they are legally married and are expecting a baby later this year. The shock of the announcement comes from the couple only dating for three months, based on their dating confirmation shortly after filming wrapped for their weekend drama Laurel Street Tailors. But that shock wears off immediately knowing that Lee Dong Gun is 37 and Jo Yoon Hee 34 years old so they are more than experienced enough to make their own judgment on a shotgun wedding so soon after dating. Their drama did film for over 6 months since the latter half of 2016 but Lee Dong Gun was still dating T-ara‘s Jiyeon and that relationship ended only in January of this year. Congrats to the happy couple and wishing Jo Yoon Hee a safe and healthy pregnancy.

The couple is legally married now after registering their marriage but will still have a wedding later in the summer after Lee Dong Gun finishes filming upcoming sageuk Seven Days Queen.