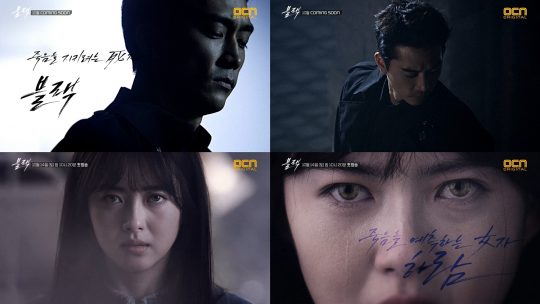 This certainly looks fantastically gloomy, just the right mood for a drama about a grim reaper and a woman who can see dead people. The timing is a bit off since supernatural K-dramas are almost always aired in August which in the lunar calendar is ghost month in Asian countries. But fall also works, when the air turns brisk and the nights long, I want to wrap myself in a blanket and get spooked properly.

Upcoming OCN drama Black released two new teasers to start the week, character-centric teasers focused on male lead Song Seung Heon who is a grim reaper cast into the human world and inhabits the body of a police detective and crosses paths with Go Ara‘s female lead who can see ghosts and it’s clearly not the warm and fuzzy type. They look fantastic in the dark moody teasers, I can feel Go Ara’s fear and Song Seung Heon can do no wrong for me when he just stands there and does his Zoolander thing.