The J-dorama adaption of popular manga Hana Yori Dango scheduled for 2018 has finally been confirmed but it’s not the adaptation or rumored leading lady initially thought. TBS will be adapting the HanaDan sequel Hana Nochi Hare – Hana Yori Dango Next Season into a live-action dorama and not making the umpteenth adaptation of the original. The manga is serializing since 2015 and set 10 years after the F4 and female lead Makino Tsukushi graduated elite Eitoku Academy.

The story follows the new clique the C5 (Correct 5) led by a male lead who was rescued by Domyouji years ago from bullies and now strives protect Eitoku and keep it’s stature up. The female lead is a poor girl attending Eitoku but is from a formerly rich family that went bankrupt, and she’s engaged to the rich student body president of the rival upstart new elite high school competing for top students with Eitoku. The leads will be played by Sugisaki Hana and idol-actor Hirano Sho from Johnny’s Entertainment, with Nakagawa Taishi playing the third wheel second male lead. The dorama is slated to premiere this April on TBS. 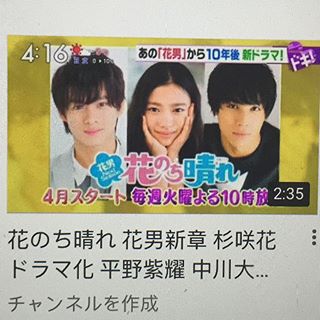