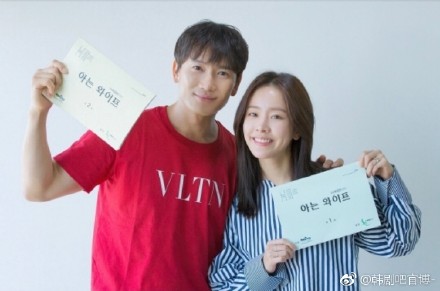 Filming has kicked off for the summer tvN drama Knowing Wife, which will air in early August after Why Secretary Kim so I’m glad it’s getting a healthy head start. Starring Ji Sung and Han Ji Min, the former can do no wrong for me while the latter rarely does anything right, yet I’m oddly optimistic this pairing will work and with it buoy the drama to good ratings. That they starred in classic Hallyu hit All In which has spawned tons of stars not just in leads Song Hye Kyo and Lee Byung Hun makes me nostalgic. Plus they have a cute warm vibe like close friends and that sometimes works wonders in drama land to make everything less stiff and awkward, which in hindsight was a big chunk of the problem with both their previous dramas Entertainer and Hyde, Jekyll, Me. Here’s to good vibes to the Knowing Wife cast!