Korea’s undisputed top movie director (as of now) returned to the country triumphant, with the top prize from the illustrious Cannes Film Festival and also his muse beside him. Bong Joon Ho and Song Kang Ho arrived at Incheon airport Tuesday to the snaps of cameras and plenty media waiting to welcome the director and star of the 2019 Palm D’Or winner Parasite. They deserved the limelight but the media got some extra special star in the background of some shots as American actress Kristen Stewart inadvertently photobombed the Parasite duo’s arrival press conference. She was in Seoul to attend a Chanel event and did her best to look low key, with sunglasses, white t-shirt, chinos, and a nondescript black backpack, except everything about Kristen Stewart is totally unique so it was clear who she is. It was hilarious to see her saunter off in the background, but once she was out of the picture all the attention is back on the two victorious winners as they showed off the Palm D’Or. 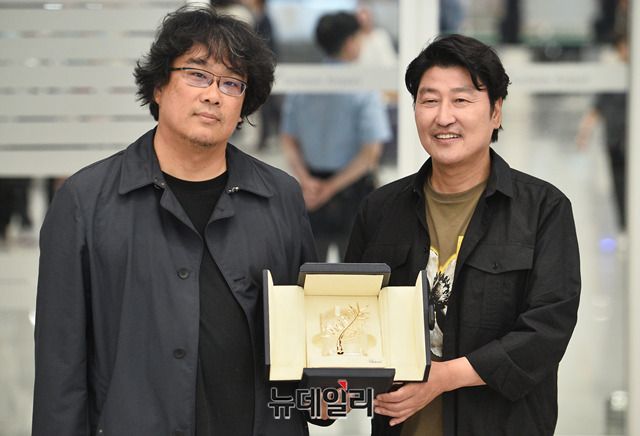