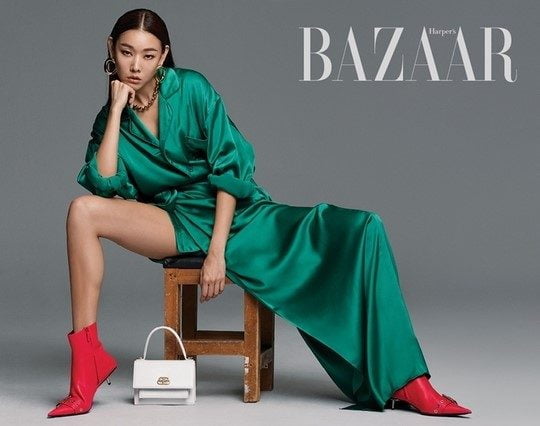 Jaw drop. Okay, now this is a high falutin’ fashion shoot and not one of this sit there and smile routine pictorials that only garner interest from me because it features an actress or actress I like. Top Korean model Han Hye Jin is featured in an eye dropping Bazaar Korea photo shoot that is dramatically black against a white backdrop. Note, it is NOT the picture above which is Han Hye Jin in an earlier Bazaar shoot, I’m keeping all the edgy pictures after the jump in case anyone doesn’t want to see it.

Without it being set in the US with the whole “blackface” legacy and African-American historical baggage, Han Hye Jin was painted entirely in pitch black body and face paint and shot against a stark white backdrop. All I see are sinewy lines almost like she’s wearing super thin armor and is stretching before going to kick some ass in battle. Fantastic and creative pictorial, kudos for pushing the envelope on this one.