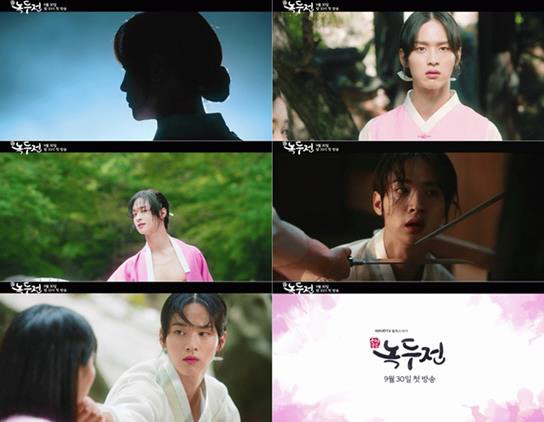 Every rising actor and actress needs a breakout role to vault to the next level and if all goes as well as it looks in previews Jang Dong Yoon is about to become a bona fide K-drama male lead for life thanks to upcoming KBS sageuk The Tale of Nokdu. He may mess it up if his acting isn’t up to par but from what I saw in A Poem a Day he’s got plenty of potential.  Female lead Kim So Hyun is already an established star and I would love for her male lead in this drama to be on par with her and the two just shoot sparks all over the place so we audiences win in the end with a great onscreen pairing. The first teaser is out and is Jang Dong Yoon-centric since he plays the flashier character being a warrior in training cross dressing as a woman to avoid an arranged marriage. He’s simultaneously very pretty but still has that masculine intensity when he looks at Kim So Hyun. I’m swooning already.

Teaser for The Tale of Nokdu: