All of South Korea, regular folks, entertainers, and even politicians are talking about the Nth Room (N Room or N Bang) vast criminal network unearthed after months of investigation. A Telegraph chat room started by a user GodGod offered up sex abuse videos and pictures and charged users to access it. The chat room was moderated by a user Cho who went by the username Baksa (Professor or Doctor) and along with a third moderator they would hack women’s phone accounts and then blackmail them to send sexually explicit material. There were over 70 victims and many were underage women, and over 260,000 viewers paid to access the content. Nth Room was the latest iteration of the room which continued to migrate to avoid detection in the dark web and the viewers paid in cryptocurrency making it harder to track them down. Cho has been arrested and his face released to the public but the masses want all the men exposed and prosecuted for this horrifying crime. Apparently the videos and pictures are just awful awful stuff so I won’t even describe it. 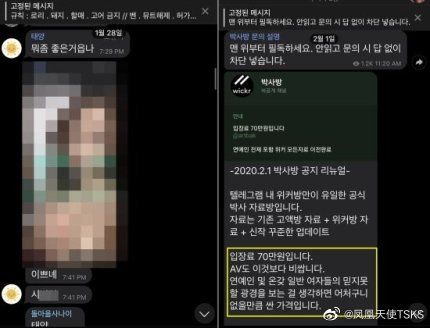