There are plenty of trendy dramas but upcoming jTBC drama Aide straddles the line of both trendy and serious. Leads Shin Mina and Lee Jung Jae are veterans yet still quite popular with their fans for a stable of great movies and dramas under their belt. The drama itself deals with Korean politics with Lee Jung Jae playing a top political aide and Shin Mina a rookie elected politician. I’m not sure there is romance other than innuendo flirting which can be hella sexy to break up the political heaviness. I find both leads looking hot as hell already in their drama stills, Lee Jung Jae makes 40 look like the new 20 and Shin Mina is ravishing in a chic bob and no nonsense attitude. Aide is airing in multi-seasons with the first season being a 10-episode offering starting this June. END_OF_DOCUMENT_TOKEN_TO_BE_REPLACED 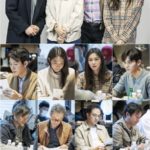 This has all the hallmarks of a good drama, being on cable with a serious political turn in this day and age where politics seem more than ever to play a role in daily lives. jTBC kicked off script reading … END_OF_DOCUMENT_TOKEN_TO_BE_REPLACED