South Koreans love their culturally significant or historically proud events dramatized and coming to theaters next month in September 2018 will be a cinematic take on the famed Seige of Ansi Fortress in 645. The Siege of Ansi was part of the first Tang dynasty attack campaign to invade and conquer Goguryeo, but in this case Ansi held strong through multiple months of the seige until the Tang forces had no choice but to retreat as winter hit. Jo In Sung plays the commander of the fortress in the movie The Great Battle (Korean title Ansi Fortress) with his stalwart forces including Nam Joo Hyuk, Bae Sung Woo, and Um Tae Goo, with the Tang commander played by Park Sung Woong who looks menacing indeed. Not sure how big a role the ladies Seolhyun and Jung Eun Chae will play in a battle siege setting but I’m excited for Jo In Sung’s first sageuk role in a decade since A Frozen Flower, and one that reverses his flower boy image to that of a grizzled military leader. END_OF_DOCUMENT_TOKEN_TO_BE_REPLACED 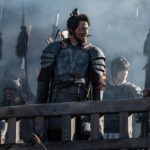 Oooooh, me likey scruffy period attire Jo In Sung! The actor hasn’t been in the spotlight much this past year and turns out he’s been filming the period K-movie Ansi Fortress which has wrapped and is in post-production for a … END_OF_DOCUMENT_TOKEN_TO_BE_REPLACED