I’m ambivalent about newly arrived jTBC Fri-Sat drama Beyond Evil (Monster) because it feels like it’s trying to be smarter than it actually is. Sometimes a good thriller is about following the breadcrumbs instead of feinting left, right, and all around to generate tension that feels overly staged. The drama premiered this weekend and got ratings of 4.451% in the first episode and dropped slightly to 3.948% in the second. The best part of the drama is Shin Ha Kyun‘s acting, he’s really putting on a bravura display that hints, shades, and insinuates so much more beneath the surface. We don’t know if he’s a wrongly accused man, a hidden monster, or a wrongfully accused man who has now turned into a monster. Compared to his experience even uber talented youngster Yeo Jin Gu just comes across as a kid from theater class doing his best to keep up. The story is interesting but these serial killer across decades yarns have been done so many times before and it’s always about this particular set of ingredients in whether it’s worth checking out. I hate the ham-fisted attempts at pointing the finger at Shin Ha Kyun’s character Dong Sik, I don’t care if he really is a closeted serial killer but by being so creepy about it then it makes look like a fake plant to play with audience emotions. I think the drama has a few more episodes to settle down and stop focusing on “is Dong Sik the killer from back and now” what if and just allow the audience to watch the cat and mouse in catching said killer.

END_OF_DOCUMENT_TOKEN_TO_BE_REPLACED 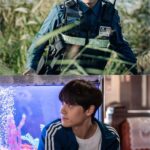 K-actor Lee Do Hyun continues with his ascension and doing so with really cool and different ways. He played one of joint male leads in 18 Again, then a memorable supporting role in action horror Sweet Home, and now he’s … END_OF_DOCUMENT_TOKEN_TO_BE_REPLACED 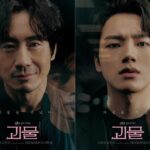 The posters and teasers for upcoming jTBC Fri-Sat drama Beyond Evil (Korean title Monster) definitely wants audiences to be uncertain going into the drama whether the male leads are good or bad. Coupling up veteran Shin Ha Kyun with youngster … END_OF_DOCUMENT_TOKEN_TO_BE_REPLACED