This is a new twist on the current deluge of Korean-Chinese jointly produced dramas and/or movies – the upcoming Chinese movie remake of the 2011 K-movie Blind is being helmed by the original director himself Ahn Sang Hoon. At least he can’t blame another director for ruining whatever made his original movie a hit, lol. Blind starred Kim Ha Neul and Yoo Seung Ho while the C-movie remake The Witness pairs together popular Chinese stars Yang Mi and Luhan.

I’d put Kim Ha Neul and Yang Mi at the same level in looks and acting talent, but acting newbie Luhan has got a long ways to go before he’s Yoo Seung Ho level. With that said, I thought Luhan was decent in Miss Granny and from the movie trailer for The Witness he’s actually got the charisma and energy to hold his own on the big screen. Yang Mi is also doing a decent job of playing a blind woman, so all in all the C-remake premiering next month doesn’t look bad at first glance at all. I think the more interesting cinematic element is to see how the same director directs the same story with a different cast and a four year time gap. END_OF_DOCUMENT_TOKEN_TO_BE_REPLACED 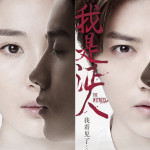 I’m actually looking forward to this movie for some reason, even though the pairing of Yang Mi with Luhan seems like a textbook no-brainer movie casting to stick the two most buzzed about C-entertainers in the same project. China continues … END_OF_DOCUMENT_TOKEN_TO_BE_REPLACED