The Korean adaptation of Chinese time-traveling romance novel Bu Bu Jing Xin may be an indisputable ratings flop with domestic Korean audiences, with ratings in the 5-6% range, but it’s now also an indisputable runaway success with Chinese online viewing audiences. Moon Lovers: Scarlet Heart: Ryeo (Bobogyungsim: Ryeo) just crossed the 1 billion views mark this week with the release of episodes 8 and 9. The drama still has half it’s run left so it might end up vying with recent Hallyu hits You From Another Star, Heirs, and Descendants of the Sun as most online views in China.

The network Youku released a tribute to Lee Jun Ki’s 4th Prince for this achievement, the drama certainly has a sprawling cast but the Chinese viewers are overwhelming watching to soak up Lee Jun Ki’s amazingly intense performance so far, as am I. In fact, I’ve let the OTP romance fall by the wayside and am simply content to watch 4 unleash all the restrained hurt and intensity in his arsenal to incinerate the screen. I continue to enjoy the drama and appreciate the very clear deviations from the original source material in narrative and character connections while keeping the broad outline the same. END_OF_DOCUMENT_TOKEN_TO_BE_REPLACED 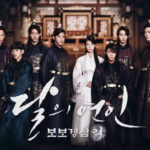 Countdown is less than a month from the premiere of the K-version of Bu Bu Jing Xin, with SBS airing Moon Lovers: Scarlet Heart: Ryeo (Bobogyungsim: Ryeo) on Monday August 29, 2016. To start off the drama week SBS has … END_OF_DOCUMENT_TOKEN_TO_BE_REPLACED

I think it’s such a happy coincidence that I’m translating Tong Hua‘s fantasy romance novel Lost You Forever right now, reminding me daily of all the things I love about her writing which all started with her first novel Bu … END_OF_DOCUMENT_TOKEN_TO_BE_REPLACED