I tend to see dating/breakup or marriage/divorce news from East Asian entertainment industries in close proximity, perhaps it’s the idea that a good news makes a couple with bad news want to release it so it gets less attention. Who knows. C-ent has two new singles as married acting couple Tong Li Ya and Chen Si Cheng announced on May 20th (520 or I Love You day) that they were divorced. It was a lowkey announcement from both with the usual thank you and heading in new directions talk. The more interesting news is C-netizens throwing her a hashtag congrats party as everyone and their mothers have been telling her that she can do better than be married to a douchebag who has multiple times been accused of cheating on her (complete with tabloid pictures at times). News of their divorce was actually censored by the Chinese government for many hours with hashtags pulled and articles blocked before allowing it through, as earlier this year the authorities announced that a 30% increase in divorce rates was alarming and they were asking couples to undergo a “cooling off period” before embarking on a divorce. So celeb divorces are being frowned upon right now as it seems to okay divorcing. Whatevs, I hope these two co-parent their son sensibly and onwards to better futures.

END_OF_DOCUMENT_TOKEN_TO_BE_REPLACED 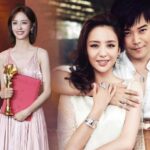 Add anothe r to the growing list of married C-stars who divorced first and announced much later. Currently rumors but not yet confirmed also include Huang Xiaoming and Angelababy from 2019, and now actress Tong Li Ya with her actor … END_OF_DOCUMENT_TOKEN_TO_BE_REPLACED

Hot dang it, China, why are you so ridiculously good to the fangirl in me. I’m bopping around the interwebz minding my own business scrounging for Da Mo Yao drama stuff when BAM!, all the C-entertainment portals lit up simultaneously. As … END_OF_DOCUMENT_TOKEN_TO_BE_REPLACED