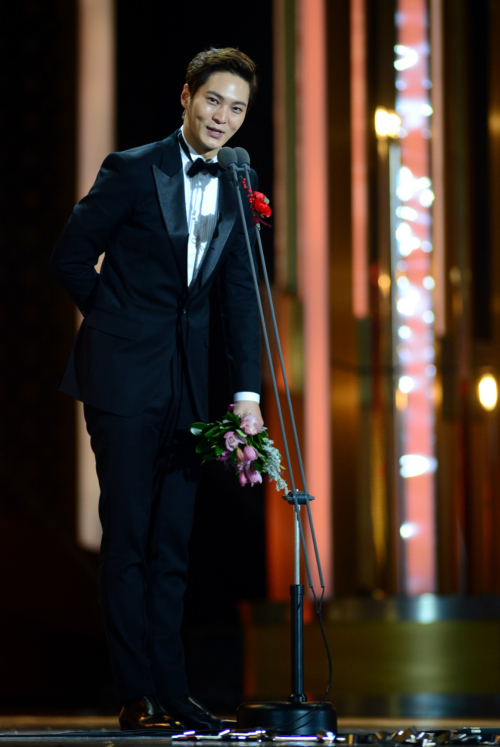 The SBS 2015 Drama Awards wraps up the trio of year end big K-drama awards shows, and while network was the overall ratings winner for the year the selections for its awards were somewhat underwhelming. Joo Won took home the Daesang for his performance in Yongpal, which I actually liked and now makes me not blah about him, but it was now what I call Daesang worthy which ever way I look at it other than from a ratings rewards perspective whereby he headlined SBS’s biggest ratings hit this year. It’s hard not to be okay with it, though, because these awards are like company appreciation tokens, and Joo Won was all tears, snot and crying during his acceptance speech and vowing to continue to improve his craft as an actor with a humanistic touch. If Six Flying Dragons were a bigger hit I think Yoo Ah In would have won the Daesang, but then again, the awards for the night felt random in the sense that a lot of it went solo to one lead in a drama but not the other, like for dramas Heard it Through the Grapevine or Mrs. Cop or Mask or Punch. I think Kim Rae Won not winning the Daesang seems to be the biggest outcry from this evening. END_OF_DOCUMENT_TOKEN_TO_BE_REPLACED

The upcoming gangster noir period film Gangnam 1970 has basically turned into the Lee Min Ho show even if the movie has him co-headlining along with Kim Rae Won. If I were Kim Rae Won I wouldn’t let this bother … END_OF_DOCUMENT_TOKEN_TO_BE_REPLACED

I’ll leave it up to the fans of the cable network jTBC drama Her Legend (Her Myth) to convince me otherwise, but holy Batman does this drama look ridiculous and sound equally insane. Cruel City (Heartless City) has already ce … END_OF_DOCUMENT_TOKEN_TO_BE_REPLACED

Fashion is like the sinkhole of K-dramas. I seriously cannot think of a single K-drama that centered around the fashion world or even tangentially related to fashion where it wasn’t either a hot mess of epic proportions (Fashion King, Cinderella … END_OF_DOCUMENT_TOKEN_TO_BE_REPLACED

Not all dramas are created equal but I think to think everything starts off on the same blank piece of paper with a concept. Lately cable networks have consistently been more innovative and entertaining than the Big Three (SBS, MBC, … END_OF_DOCUMENT_TOKEN_TO_BE_REPLACED

What in the Furby’s name is this craziness! The delicious Kim Ji Hoon was released from military service last month and has been understandably laying low, clearly to plot the right vehicle for his onscreen return. The media has just … END_OF_DOCUMENT_TOKEN_TO_BE_REPLACED