Well I guess this means she’s not kicking him to the curb, complete with divorce papers and then taking him for every dime he’s got. K-actress Choo Ja Hyun has released her first public statement on this week’s cheating scandal involving her husband Chinese actor-composer Yu Xiaoguang, who was caught with a young woman sitting in his lap in the van and the two looking mighty cozy. He said it was just a platonic old friend and apologized if the conduct led to misunderstanding from the public and he was sorry about that. Because old friends of the opposite gender absolutely allow lap sitting, duh. His wife’s statement was that she admonished and chastised her husband for his conduct which even if between platonic friends, and she said that she knew this woman as well, was not the appropriate conduct. She says Yu Xiaoguang is reflecting and genuinely remorseful, and Yu Xiaoguang also released a statement today saying the same thing. The two will move forward together and hope to put this behind them. Sigh.

END_OF_DOCUMENT_TOKEN_TO_BE_REPLACED 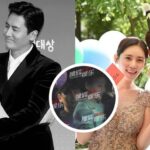 I’m not going to sur mise over why K-actress Choo Ja Hyun married C-actor/composer Yu Xiaoguang but he absolutely has a punch-able face. Like, even before this week’s scandal went down he just has a face that screams douchebag. C-ent … END_OF_DOCUMENT_TOKEN_TO_BE_REPLACED