Well, it’s out of the military and into the police for Daesung, for questioning that is. Big Bang‘s newly discharged from military service member Daesung will be headed into the police station next week for questioning on the case of a building he owns being rented out to several brothels. The proprietors of those brothels have been booked and the enterprises shut down but Daesung being the owner of the building certainly casts a shadow on his involvement. Did he know when his lessees were using the space for, or was this one of many buildings he owned where he hired a professional management service to handle the rentals. Apparently he consulted a lawyer before asking whether he could be liable for brothels being run in buildings he owns so that hypothetical question certainly colors him claiming no knowledge. Either way, with how much worse Seungri allegedly broke the law and still hasn’t been prosecuted, I don’t see anything beyond a slap on the wrist for Daesung. END_OF_DOCUMENT_TOKEN_TO_BE_REPLACED 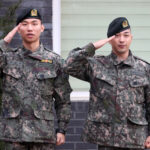 It’s been a bad year of publicity for K-pop boy group Big Bang most notably around member Seungri. Maybe that will change now that three of his group members have successively returned from military service and perchance the group promotes … END_OF_DOCUMENT_TOKEN_TO_BE_REPLACED

After Birdie Buddy and The Musical were picked up this year by cable networks and aired, the number of pre-filmed dramas waiting for an airing date and network dwindled down to just What’s Up, which coincidentally was the only one … END_OF_DOCUMENT_TOKEN_TO_BE_REPLACED