K-media is taking stock of 2016 and the results are not exactly promising for the future of pre-producing K-dramas. What was once a rarity such as the mega budget Legend felt like a norm in 2016 with a slew of fully pre-produced K-dramas aimed at being simulcast in China and further recoup costs. I don’t know which of the pre-produced dramas ended up making back its costs and earning a profit, but in terms of domestic Korean ratings there is only one success story in Descendants of the Sun. Kim Eun Sook‘s high profile disaster and medical drama was a ratings hit in Korea and overseas, and remained the only such pre-produced drama despite a slew of other high profile projects subsequently released. Uncontrollably Fond was a middling release, Moon Lovers: Scarlet Heart: Ryeo an abject failure, Hwarang a new release but slow out of the gate, Cinderella and Four Knights didn’t make a dent, and Entourage ended up being an epic face plant. END_OF_DOCUMENT_TOKEN_TO_BE_REPLACED 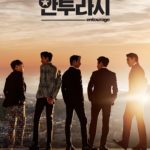 Dang, so much hats off and kudos to the production design team of tvN‘s upcoming remake of hit US show Entourage. The drama posters are excellently stylish and evocative, blending sleek entertainment world glamour with bromance insouciance. The top one … END_OF_DOCUMENT_TOKEN_TO_BE_REPLACED