This year’s Forbes Asia 30 under 30 is out and is not as stacked with Korean stars in the Entertainment and Sports category as last year in 2016. The K-stars to the make 2017 Sports and Entertainment category 30 under 30 list are Jessica Jung formerly of SNSD and now a solo singer and designer, singer Jay Park, and singer Eric Nam. Since this is a 30 under 30 list the celebrity has to be under 30 years old so last year’s most popular Korean actors Song Joong Ki and Gong Yoo are both over 30 and not eligible. Since I don’t follow K-pop y’all have to tell me if Jessica, Jay, and Roy really were all that big last year. This list also doesn’t include groups which takes out super popular idol groups TWICE and BTS. It’s quite an impressive list to get on so congrats! END_OF_DOCUMENT_TOKEN_TO_BE_REPLACED 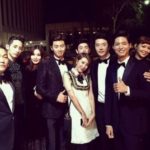