The last Fuji TV Getsu9 (Monday @ nine) dorama I watched was the thoroughly entertaining and enjoyable 5-ji kara 9-ji made (From Five to Nine) with Yamapi and Ishihara Satomi. I’m passing on the currently airing Itsu Koi (Love that Makes You Cry) from the title alone, but it does make me wonder if the network is planning to stick with romance doramas in that time slot. The big news last week was the announcement that A-list superstar Fukuyama Masaharu was going to be in the next Fuji TV Getsu9 dorama, and it’s also going to be a romance story! It’s called Love Song, which brings back memories of the scuttled K-drama project from years ago that was supposed to star Park Yong Ha and Yoon Eun Hye. This Love Song dorama is unrelated to that one and tells of the romance between a has-been singer and the woman who stumbles into his life. My eyes lit up on seeing the two big name directors who will be co-directing – Nishitani Hiroshi directed Tsuki no Koibito, Galileo, and Engine, among many more, while Hirano Shin is coming off recent directorial successes with 5-ji kara 9-ji made, Dear Sister, Last Cinderella, Priceless, and Lucky Seven. END_OF_DOCUMENT_TOKEN_TO_BE_REPLACED 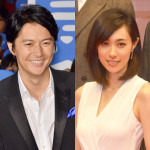 Japan woke up to a huge entertainment world news shocker Monday morning – top singer-actor Fukuyama Masaharu got married to secret actress girlfriend Fukiishi Kazue. There is a 13 year age gap between the couple, with Masa being 46 years old … END_OF_DOCUMENT_TOKEN_TO_BE_REPLACED

The upcoming TW-drama You Light Up My Star is starting to look to more and more interesting, and I’m not just talking about the all-star team of Director Winnie (In Time With You, It Started With a Kiss) directing the … END_OF_DOCUMENT_TOKEN_TO_BE_REPLACED

A couple of months ago I did a write up on TW-actors and TW-actresses, which was relatively easy to do since there just aren’t that many of them occupying the perch as certifiable leads. The same isn’t true elsewhere, which … END_OF_DOCUMENT_TOKEN_TO_BE_REPLACED