Even those who toe the line are not immune from the harsh hand of the Chinese government tightening of entertainment industry behavior. This weekend CCTV aired a cultural minority musical celebration program and netizens noticed that original star participants popular young stars Wang Yibo and Guan Xiaotong are both missing. They were at the dress rehearsal last week and listed as part of the show but are now missing and where they would have stood on stage for their performance is now a traditional singer wearing a Mao style suit. There is no indication why they were removed – was it because each fell into one of the categories that the 8 decrees are prohibiting to be shown onscreen or simply overzealous implementation by CCTV to avoid having popular young stars with big fanbases on the program for optics reasons. With that said, reportedly Wang Yibo’s fandom is atwitter with the rumor that he will be iced for the near term for the brouhaha with Zhao Li Ying’s fan’s last week.

END_OF_DOCUMENT_TOKEN_TO_BE_REPLACED 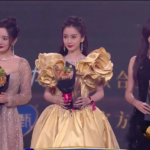 It’s been some time since I saw so much glitz and glamour and this time it’s courtesy of C-ent which held the 2020 Weibo Night Awards despite it already being 2021. Better late than never and the ceremony feted popular … END_OF_DOCUMENT_TOKEN_TO_BE_REPLACED