The concept of SBS Fri-Sat night K-drama Hot Blooded Priest (The Fiery Priest) sounds like one of those jokes like a priest and a few other religious figures walks into a bar and a difference of perceptions results in lots of luz. In this case, there is definitely laughter to come but Hot Blooded Priest is but the third drama in 6 months to put a priest character front and center after The Guest and the directly titled Priest. Kim Nam Gil makes his first drama in two years after the well-received Live Up to Your Name, exchanging his modern and sageuk doctor scrubs for the priest’s frock complete with super dramatic long coat look perfect for the slo-mo walk with the wind blowing. He’s of course hot blooded, i.e. hot tempered, like the title suggests and will partner up with a timid detective played by Kim Sung Kyun and a surly prosecutor played by Honey Lee in order to solve the crime of a murdered Catholic priest which turns out to have deep reaching conspiracy roots. Directing is the PD from Punch and Fashion King, with the script from the hands of the writer who did Chief Kim, Blood, and Good Doctor. The drama premieres next Friday on February 15th. END_OF_DOCUMENT_TOKEN_TO_BE_REPLACED 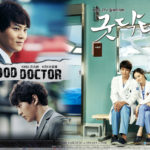 The K-drama Good Doctor has stayed in the news cycles for the past year thanks to a successful US show adaptation and again now as Japan prepares to remake it into a J-dorama. The screenwriter really hit it big with … END_OF_DOCUMENT_TOKEN_TO_BE_REPLACED