The hit weekend My Golden Life has launched K-actress Shin Hye Sun‘s career into the next level very similar to Seo Hyun Jin after she did Another Oh Hae Young. Seo Hyun Jin followed that up with the very success Romantic Doctor, Teacher Kim, so now we’ll see if Shin Hye Sun can rise her wave through her upcoming drama Thirty But Seventeen. The first stills are out and Shin Hye Sun looks so much like Moon Geun Young from the Cinderella Unni vibe I did a double take. Her male leads Yang Se Jong and Ahn Hyo Seob are both still squarely in the rising male actor category but if the roles are well written both have the potential to deliver. I do love the premise that both leads are adults in their 30s but their emotional and mental states are stuck being 17 year olds. That makes for lots of innocent romance and hard knock fast growing up. END_OF_DOCUMENT_TOKEN_TO_BE_REPLACED 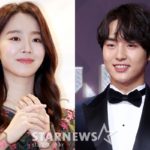 Another day another K-drama casting news, these things are flying left and right and I’m having trouble keeping which drama has which leads in discussion straight, especially when the same name gets attached to two projects. Actress Shin Hye Sun … END_OF_DOCUMENT_TOKEN_TO_BE_REPLACED