I do love covering the year end Big Three network K-drama awards ceremony, it’s like a company banquet rewarding high performing employees and another chance to check out red carpet fashion. That’s why I’m genuinely sad that we may only have one year end drama award for 2017 over at SBS, with strike-plagued MBC and KBS announcing today that they may not hold the annual year end drama awards. Both networks are still considering, and may also not hold their usual year end music and entertainment variety awards as well, all due to the two months long strike by their employees and labor unions demanding the ouster of the respective network presidents. I’m fine with my entertainment consumption coming in second to the pursuit of justice and fairness so if it means only SBS, and likely cable network tvN, will hold year end drama awards then that’s fine with me. Ultimately both MBC and KBS having mostly duds in the prime time slots in 2017 with KBS having success only in the weekend dramas with Laurel Tree Tailors into Father is Strange and now My Golden Life. END_OF_DOCUMENT_TOKEN_TO_BE_REPLACED 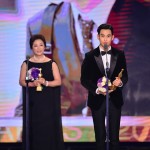 Just because KBS is the ratings pits all year doesn’t mean it can’t throw a fun awards party and reward the acting talent that has attempted to infuse some excitement and life into the network’s drama. Things were going swimmingly … END_OF_DOCUMENT_TOKEN_TO_BE_REPLACED