I feel the Song Joong Ki influence is so strong for his upcoming drama comeback with tvN series Vincenzo. So many of his costars have worked with him before and I’m sure when the drama airs I’ll spot even more. Song Joong Ki is the titular Vincenzo with female lead Jeon Yeo Bin and second male leads Taecyeon and Kwak Dong Yeon. Adding to the talented cast in supporting roles is recent addition the K-ent Choi Young Joon who debuted in last year’s Arthdal Chronicles and is currently playing the detective sunbae in Flower of Evil. There will also be the scene stealer from Crash Landing on You Yang Kyung Won as well as veterans Jo Han Chul and Kim Yeo Jin. So much fire power, the drama writing better be good!

END_OF_DOCUMENT_TOKEN_TO_BE_REPLACED 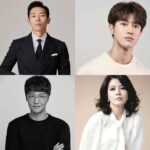 Awwwww, after that amazing guest starring turn as a mental patient in It’s Okay to be Okay, I was hoping for the warm and cuddly side of Kwak Dong Yeon for his next drama. But it’s going to be his … END_OF_DOCUMENT_TOKEN_TO_BE_REPLACED