It’s not hard to root for a wronged woman, and a wronged mom makes it double the edge. Recently premiered Channel A makjang drama Lies of Lies (hahaha even the title is so makjang) recorded a 4.276% ratings in the most recently aired episode 4. That’s the highest ratings ever for a Channel A drama and there is so many more episodes left one wonders how high can this go. Female lead Lee Yoo Ri shot to fame as the antagonist in Come! Jang Bo Ri six years ago and has since not yet found her own leading lady footing. This drama could be it and she does look so downtrodden yet determined I could totally see housewives connecting with a woman who keeps getting wronged but has the guts to fight back.

END_OF_DOCUMENT_TOKEN_TO_BE_REPLACED 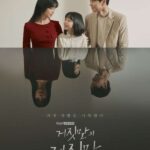 My takeaways from the posters , stills, and synopsis for upcoming Channel A melodrama Lie of Lies is that it’s like a prison sentence in and of itself to marry into a chaebol family and lies beget more lies. K-actress … END_OF_DOCUMENT_TOKEN_TO_BE_REPLACED