Okay, hearing this story makes me want to punch Katsuji Ryo in the face, like he legit has an asshole punchable face. J-ent reported in June that married for two years star couple AKB idol-turned-actress Maeda Atsuko and kabuki actor Katsuji Ryo were on the outs as in June 2020 he had moved out of their shared marital residence. Maeda gave birth to their son over a year ago and reportedly Katsuji is hands off dad and doesn’t do any childcare at home. His friends claim it’s merely the stress of raising a child on both parties. Maeda reportedly stopped wearing her ring this month in August and was seen reunited with her former AKB group mates for a charity event sporting super short hair, or what we call “chop it all off, imma need a fresh start!” look. The couples friends say that Maeda was waiting for her husband to come home but he’s won’t so she’s done with trying to save the marriage. Good riddance but oh boy I feel bad for their little baby.

END_OF_DOCUMENT_TOKEN_TO_BE_REPLACED 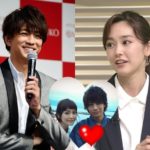 It’s a big end to the month of July in J-ent as two big name acting couples suddenly announced marriages. First was Miura Shohei (30) and Kiritani Mirei (28) getting married after dating for two years since doing the drama … END_OF_DOCUMENT_TOKEN_TO_BE_REPLACED

Next Thursday sees the premiere of Saikou no Jinsei no Owarikata~Ending Planner~, marking Yamashita Tomohisa‘s return to dorama land since Code Blue 2 back in early 2010. The teasers have been released, and it’s clear that whomever styled Yamapi is … END_OF_DOCUMENT_TOKEN_TO_BE_REPLACED

Just two weeks after Yamashita Tomohisa confirmed his return to doramaland in the upcoming January 2012 Saikō no Jinsei no Owarikata: Ending Planner, the rest of the main cast has now been finalized. In some ways its better than I … END_OF_DOCUMENT_TOKEN_TO_BE_REPLACED