While C-ent has been popping out good news this week with marriage announcement and maybe baby as well as wedding speculation, K-ent went down two tabloid muckraking rabbit holes the opposite direction. First up is a tabloid report that recently married actor Jo Jung Seok cheated on longtime girlfriend and now wife Gummy with former SPICA member Yang Ji Won. The report claims that he’s been cheating on Gummy with her for three years and Gummy accepted it, which made Jo Jung Seok decide to finally marry his long suffering girlfriend who gave him such long rope to roam. Jo Jung Seok’s side has vociferously denied this and is threatening legal action. Another tabloid gossip this week is reports that variety show maestro Na PD hooked up with actress Jung Yumi after working together on his show Youn’s Kitchen. Both have released denial statements through their agencies and also vowed to take legal action. END_OF_DOCUMENT_TOKEN_TO_BE_REPLACED 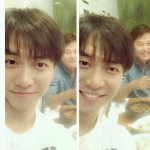 One of the positives in this age of social media connection is the chance to see the personal side of favorite stars from their own hands. The stars upload pictures and status updates as they see fit, sometimes to disastrous … END_OF_DOCUMENT_TOKEN_TO_BE_REPLACED