One by one Japan’s most popular mangas are getting live action movie or drama adaptations, even ones formerly considered impossible to adapt due to technological limitations. Coming this summer is the first live action adaptation of one of the best selling shonen mangas of all time Jojo’s Bizarre Adventure, which is indeed weird and bizarre like it’s title suggests. There’s punks and fighting and mystery and quests, all wrapped into a odd shell of yankee styling leads, where yankee is the Japanese colloquial moniker for delinquent high school students. Cutie pie Yamazaki Kento gets turned into male lead Higashikata Josuke with rising actress Komatsu Nana as the sole female lead among the sea of testosterone. This recently released movie preview has fandom divided but at least people remained interested, and for me it’s just something cool and different to look forward to. END_OF_DOCUMENT_TOKEN_TO_BE_REPLACED 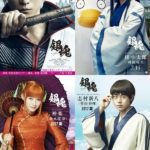 I’m truly baffled by Aibu Saki‘s career in J-ent. She’s an okay actress and pretty enough, but definitely not the usual sweet faced ingenue nor is she the hot and bitchy type that gets all the guys excited. Yet she … END_OF_DOCUMENT_TOKEN_TO_BE_REPLACED

Who has watched a Taiga in your lifetime? Any Taiga will do. My last one was 2010’s Ryomaden due to my Fukuyama Masaharu bias, but I mostly skip all the ones in in the last decade or so. This year’s … END_OF_DOCUMENT_TOKEN_TO_BE_REPLACED