Hearing news on classic Hallyu teen drama Goong (Princess Hours) is like a blast to the past. They really don’t make dramas like this anymore and this one still stands up on rewatch. Female lead Yoon Eun Hye was on variety show Knowing Bros this weekend and one topic she shared insider info on was filming the drama, specifically the scene after the OTP has acknowledged their feelings for each other and goes out of the palace grounds on a date. They are walking through the busy Seoul streets and then stop to steal a kiss. It’s adorable and even moreso hearing that the scene wasn’t staged or posed and instead the two leads were told to act like they were on a date and kiss as the camera was trained on the crowd from a distance. So everyone swarming around them were real passerby and the scene was filmed just like that. Afterwards when the two ran away it was also unscripted as the two were feeling shy having just kissed in public for the drama around the unsuspecting public. It’s soooo much awwww I can’t even.

END_OF_DOCUMENT_TOKEN_TO_BE_REPLACED 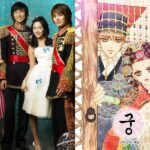 I react to remake or new adaptation news based on the circumstances of each, time between and whether I think the previous one really feels outdated and the source material rich enough to merit a fresh take so new generations … END_OF_DOCUMENT_TOKEN_TO_BE_REPLACED