This is a project I’ve been expecting Korea to remake, and now the watch is on as rumors have started that popular Chinese novel Silent Separation will for sure be getting a K-drama adaptation. The Chinese market has already adapted to novel twice – the first time into the C-drama My Sunshine with Wallace Chung and Tang Yan, and subsequently into the movie You Are My Sunshine with Huang Xiaoming and Yang Mi. I really enjoyed the C-drama even if it was a whole lot of minor angst stretched out into 40 episodes. Wallace made it all watchable while Tang Tang was just serviceable enough to carry her side of the load.

The story is about a pair of college lovers who are separated due to circumstances and misunderstandings, with each carrying a torch for the other which reignites again when they are reunited years later. The rumors claim the drama will air on MBC and star Lee Jong Seok and Park Shin Hye, with the second leads being Krystal of f(x) and Jo In Sung. At this point the former is highly likely, while the latter will happen when pigs fly LOL. I’m sure the rumored casting choices are just wishful thinking, but it does get me excited about who could possibly play the charismatic and broody male lead He Yi Chen. Wallace was basically perfect casting in looks and acting aura, he’s going to be a high bar to match up to. END_OF_DOCUMENT_TOKEN_TO_BE_REPLACED 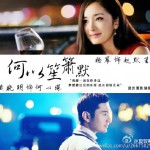 It’s crazy how popular Silent Separation (何以笙箫默 He Yi Sheng Xiao Mo) the story is lately all thanks to the hit C-drama adaptation with the English title of My Sunshine. I could do with never hearing the same name theme … END_OF_DOCUMENT_TOKEN_TO_BE_REPLACED

I’m way addicted to the currently airing C-drama My Sunshine based on the Gu Man novel Silent Separation (He Yi Sheng Xiao Mo 何以笙箫默), one of those rare beasts where is the drama is good as the novel. That’s saying a lot … END_OF_DOCUMENT_TOKEN_TO_BE_REPLACED