This is the most random dating gossip ever whether it’s true or false. K-ent got a dose of hot gossip coming from C-ent this week, with the Chinese media reporting that top Korean star Kim Soo Hyun was planning an April wedding to former Wonder Girls singer turned actress Sohee. The fact that they are not even dating, at least not confirmed though rumors in the past have linked the two, makes this so-called new even more hilarious. Both sides have swiftly refuted the rumor and denied even being in a relationship, with the refusal being easy coming from their mutual agency KeyEast. That reportedly is another clue they are a couple, with Sohee signing with KeyEast last year supposedly because Kim Soo Hyun brought her into his long time agency. KeyEast is vigorously denying the rumor and is planning to take legal action. END_OF_DOCUMENT_TOKEN_TO_BE_REPLACED 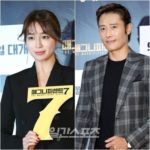 The summer blockbuster movie season has wrapped and Korean entertainment found worldwide glory with the hit zombie on trains thriller Train to Busan. Starting off the fall season an old school Western movie The Magnificent Seven which had an early … END_OF_DOCUMENT_TOKEN_TO_BE_REPLACED

The upcoming tvN drama Heart to Heart is going to have huge shoes to follow coming right after the highly rated and critically well-received Misaeng airing on Fri-Sat nights. At least the drama has finished casting the main leads and … END_OF_DOCUMENT_TOKEN_TO_BE_REPLACED