It’s clear C-actor Hu Ge has his eyes on a prize bigger than popularity and easy appeal as he’s about to follow up multiple hit dramas from recent years with a turn to the dark side. Hu Ge has been playing sweet male lead characters from his debut days and in recent years veered into the upstanding calculating type in The Disguiser and Nirvana in Fire. Now he gets to play real bad in C-movie Cherry Returns (Chinese title That Summer, Where Did You Go). It’s about a girl who gets kidnapped at the age of 12 year and comes home 12 years later all grown up and suffering from massive PTSD, collaborating with her kidnapper for a long brewing revenge plan. Hu Ge plays said kidnapper and the role is all bad without a lick of redemption, so he’s actually quite excited to don the mantle of the antagonist. The movie looks fantastic and baddie Hu Ge even more mesmerizing to behold. END_OF_DOCUMENT_TOKEN_TO_BE_REPLACED 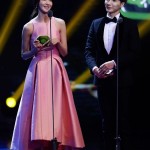 Now this is how I call throwing a fun awards show shindig. One of China’s top streaming sites iQiyi hosted the 2016 All-star Carnival this past weekend and it appeared all the It Stars showed up, and then some. There … END_OF_DOCUMENT_TOKEN_TO_BE_REPLACED