The second episode of tvN Sat-Sun drama Vincenzo can best be described by Song Joong Ki saying “I’m back, bitches!” and me saying “Drama gods almighty I have no f*cking clue what I am watching!” This drama is like Dong Ryeong from Answer Me 1988 got together with Jung Hwan’s dad and they wrote a script complete with 1980’s HK gangster slickness and South Korean weird dad humor. I would say this drama has no chance in hell to bring in high ratings and then I am proved so totally wrong as episode 2 increased to 9.295%. For comparison’s sake, its predecessor Queen Cheorin premiered to 8.030% and didn’t break 9% until episode 3. I think Song Joong Ki‘s charisma is hard carrying the drama alongside Yoo Jae Myung‘s character as the lawyer daddy who is the only sane, normal, principled person in the drama (so far). Jeon Yeo Bin continues to overact (OMG can we dial her down maybe like a million notches) but I can tell she’s being directed to do so and either her acting ability just cannot balance that delicate fine line between self-absorbed emotive bitch and quirky oddball with past trauma that must be fueling her current behavior. I know all the supporting characters at the Plaza must be there to play a pointed purpose but it feels like there are too many of them. Overall this drama clearly connects with domestic audiences and having consumed so many dramas/movies/books I know this drama will have a payoff if one is patient and/or enjoys the pinball swerves every few minutes in tone and execution.

END_OF_DOCUMENT_TOKEN_TO_BE_REPLACED 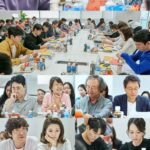 And they’re off the race s, or at least racing towards zero whatever that means in the drama. Script reading pictures have been released for early January 2020 MBC drama The Game: Towards Zero, starring Taecyeon, Lee Yeon Hee, and … END_OF_DOCUMENT_TOKEN_TO_BE_REPLACED

The first new drama to arrive in 2020 sounds lik e it will be The Game: Towards Zero, or towards hopefully a good year for K-drama ratings. The drama is scheduled to air in January 2020 on MBC Wed-Thurs and … END_OF_DOCUMENT_TOKEN_TO_BE_REPLACED