There are myriad reasons to be interested or disappointed with any upcoming entertainment product due to it’s previews, but the most substantive has got to be the simple reason that it looks awesome or totally stupid. Gotta give famed Japanese director Miike Takashi credit for tackling the live-action adaptation of popular sci-fi shonen manga Terraformars, too bad the first preview is all unintentional hilarity even with such a sprawling telegenic cast. Headlining Hideaki Ito, he is the commanding officer leading youngster cast to terraform Mars consisting of Oguri Shun, Yamashita Tomohisa, Yamada Takayuki, Takei Emi, Kikuchi Rinko, Kato Masaya, and Kosugi Kane.

In the near future, Earth is being destroyed by overpopulation so scientists send modified algae to Mars along with cockroaches to consume and spread the algae in order to terraform the planet. Hundreds of years pass and when the humans finally land on Mars, they discover the planet is inhabited by evolved now humanoid cockroaches who will fight for their right to the planet. The manga has been accused of being racist but putting that aside, it’s also quite gory and violent, but the movie feels rather antiseptic with the cast in second hand storm trooper uniforms wandering around a spaceship. Here’s to hoping the movie is worth everyone’s while. END_OF_DOCUMENT_TOKEN_TO_BE_REPLACED 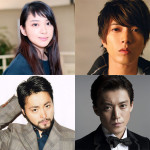 By all that is holy I need this movie NOW. The epic cast of upcoming J-movie Terraformars has been filming since May but the movie is headed to Iceland next month for a full scale location shoot, and finally revealing … END_OF_DOCUMENT_TOKEN_TO_BE_REPLACED

I’m usually a few months behind on following up with Asian movies that I’m anticipating. I’m too lazy to schlep to the theaters that play foreign films and a few months wait is never too taxing when there are other … END_OF_DOCUMENT_TOKEN_TO_BE_REPLACED

One woah momma isn’t enough for the just released official movie trailer for this Summer’s epic two-part sequel to the blockbuster and critically well-reviewed Rurouni Kenshin movie. It was a no-brainer for the studio to green light a sequel almost … END_OF_DOCUMENT_TOKEN_TO_BE_REPLACED

While I was in Taiwan and Japan these past two weeks, I got to watch a ton of inflight movies. I must’ve hit the motherlode because almost every Asian movie I wanted to watch last year was available on demand … END_OF_DOCUMENT_TOKEN_TO_BE_REPLACED

The upcoming Rurouni Kenshin live-action movie has the potential to be the holy grail for manga lovers. We have one qualitatively incredible manga, both in terms of storytelling and illustration, that has now been cast perfectly for the live-action adaptation. … END_OF_DOCUMENT_TOKEN_TO_BE_REPLACED

The awesome that will be the Rurouni Kenshin movie knows no bounds. The final two-minute long movie trailer has just been released and sometime between dinner and now I scraped my jaw off the floor to write up this post. … END_OF_DOCUMENT_TOKEN_TO_BE_REPLACED

On my list of top mangas of all time (around 30 or so currently reside on said list) is Rurouni Kenshin: Meiji Swordsman Romantic Story (るろうに剣心 -明治剣客浪漫譚). It’s one of the rare shonen mangas that I love without reservation, with great … END_OF_DOCUMENT_TOKEN_TO_BE_REPLACED