Allow me some space to grieve folks, even if its posting old pictures. These filming and promotional stills with Takeuchi Yuko and Miura Haruma are from two years ago in 2018 when the two filmed the movie Confidence Man JP: The Movie, which takes the popular dorama starring Nagasawa Masami and moved it to the big screen. They were back for the sequel Confidence Man JP: Episode of the Princess which was slated for a March 2020 release but delayed due to both COVID-19 and male lead Higashide Masahiro‘s scandal of cheating on now ex-wife Watanabe Anne (she tried to forgive him but last month the couple finalized the divorce). I actually still haven’t watched the original dorama but caught the first movie on a flight to Asia and loved it, it’s so fun and also made me thrilled to see both Haruma and Yuko with memorable supporting roles in the movie. Sadly it’s not become a moment to remember them both together, that they had a chance to work together, were lovely onscreen, and now has left us much too early. To ask why downplays the true danger that is emotional and mental pain, and I hope both are at peace as they have left us to keep mourning with only their works to revisit their undeniable talent.

END_OF_DOCUMENT_TOKEN_TO_BE_REPLACED 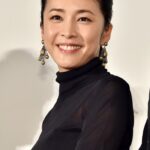 F*#k F%&k F@$K 2020 to here and never back again! This cannot be happening. I…..just…..I can’t. I feel like I’m burying loved ones on after another and it’s inconceivable why it keeps happening. J-ent has reported that top J-actress Takeuchi … END_OF_DOCUMENT_TOKEN_TO_BE_REPLACED