The upcoming KBS drama The Best Hit got on my radar when it cast cutie Yoon Si Yoon as the male lead, and has increased my interest thanks to cute teaser stills and now a set of fun drama posters and previews. The drama airs this coming Friday June 2nd in the same time slot that KBS aired the first variety drama Producer to mixed ratings and reception but was a successful attempt in my books. Coming back to star and direct this hybrid genre is Cha Tae Hyun and he hands the younger stars Yoon Si Yoon, Kim Min Jae, and Lee Se Young the reins to be loud and out as we see their characters navigating the dreams and travails of entertainment stardom. I even see new stills with Jang Hyuk making a cameo appearance for good friend Cha Tae Hyun so I’m expecting lots more special pop ups as the drama airs. END_OF_DOCUMENT_TOKEN_TO_BE_REPLACED 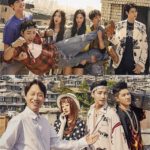 I don’t know what the conceptual going on is happening in the first promo pictures for variety drama The Best Hit but anything with Yoon Si Yoon automatically takes on an adorable tint for me. The KBS drama will air … END_OF_DOCUMENT_TOKEN_TO_BE_REPLACED